NEW DELHI: Rural demand is driving up India’s electricity consumption, backed by a 3.4 per cent farm sector growth amid 23.9 per cent contraction in GDP in the first quarter of the current fiscal. Primarily agrarian states in the northern and eastern regions are posting healthy growth in power consumption, while heavily industrialised states in the western and southern regions continue to falter due to sluggish recovery in industrial activity.

While farm activity largely remained unaffected by the lockdown, factors such as return of migrants to their native places buoyed rural demand. The humid weather also added its bit to boosting domestic consumption on all-India basis as people still largely remain indoors and work from home, prompting households to run air-conditioners for longer.

Analysis of supply data from the national grid operator by rating agency ICRA shows power consumption hitting nearly 98 per cent of the pre-Covid level in August, up from 97 per cent in July. Demand in northern and eastern states grew between 6 per cent and 13 per cent in July, while those in large industrial states in the western and southern regions fell in the same range on slow recovery in industrial activity and renewed lockdowns. 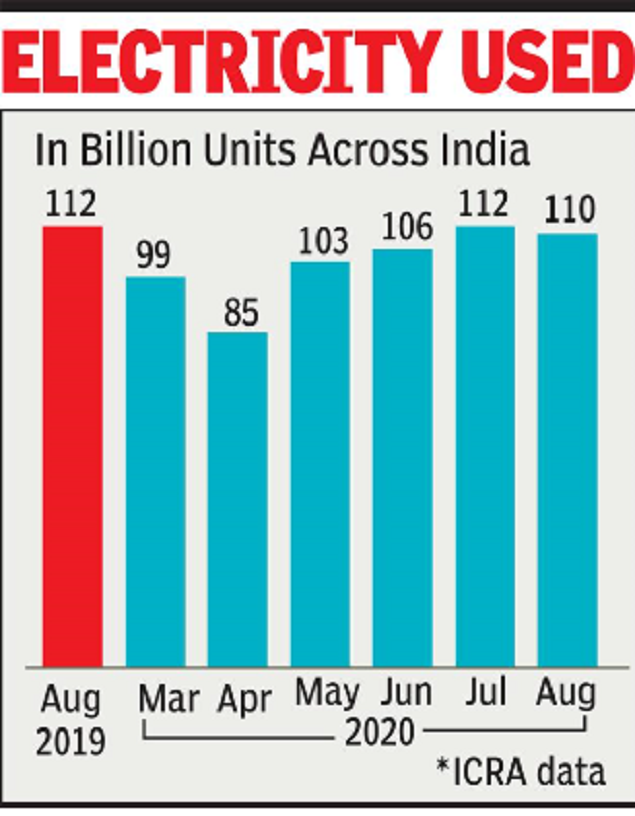 “A combination of factors is driving rural demand. One is agriculture, which was not much affected by the lockdown and grew 3.4 per cent even while the economy shrank 23.9 per cent in the first quarter. The return of migrants to their native places has added to rural consumption, helped by household electrification and improved supply,” Girishkumar Kadam, ICRA sector head and vice-president, corporate ratings, told TOI.

“But rise in rural or domestic demand is not enough for discoms (distribution companies) to make up for tepid demand from high tariff-paying commercial and industrial (C&I) consumers,” he said.

Other analysts said demand for electricity from industry will rise only after the flow of material and products stabilise once ready stocks at factories and supply depots are gone and there are no local lockdowns.

The decline in demand has adversely impacted revenue and cash flow of discoms, especially when the bulk of the consumption decline has come from high tariff-paying industrial and commercial consumers.

The countrywide lockdown imposed to check the spread of coronavirus knocked off all-India power demand by 13 per cent in the first four months of the current financial year. While the monthly demand recovered to 112 billion units in July, it was lower than the comparable year-ago period.

Half a million renewable energy jobs were created in 2019, IRENA reveals