CHANDIGARH: The privatisation of electricity department has gained pace as the government-owned Power Finance Corporation Limited (PFC) has appointed private company Deloitte as a consultant.

Last month, finance minister Nirmala Sitharaman had said that electricity distribution companies in Union Territories (UTs) will be privatised. Earlier, the UT had engaged PFC to unbundle the department and transform it into a corporate. 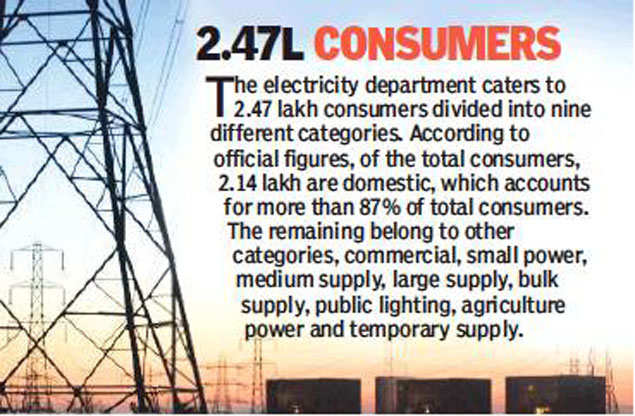 A senior UT official said initially, the move was to convert the department into a corporation and then into a private one. But after the finance minister’s announcement, the administration decided to engage the Centre’s consultant. In this process, the Centre will bear the financial burden of engaging the consultant. The administration plans to complete the process by January 2021, he added.

Meanwhile, the power department employees continued with their protest against the move. They have even sought help from city residents and various political parties.

Last year, a letter was written by UT special secretary (engineering) to the superintending engineer (SE) stating that the administration has decided to appoint a consultant for the purpose of corporatisation of the electricity wing of the engineering department.

The special secretary had also directed the SE to immediately start the process of appointing a consultant through a competitive bidding system.

Joint Electricity Regulatory Commission (JERC), in the past too, had issued directions to the administration for restructuring and reformation of the department, which is mandatory as per the Electricity Act, 2003.

The commission had pulled up the department during a public hearing in 2018 for delay in enforcing the mandate of the act pertaining to corporatisation.

As Chandigarh does not have its own power generation, the state transmission utility will be responsible for ensuring smooth transmission of power in the city. State load dispatch centre will be the apex body to ensure integrated operation of the power system. It will also be responsible for optimum scheduling and dispatch of electricity; maintaining accounts of the quantity of electricity transmitted and maintaining control over the intra-state transmission system.